Art Center – Introduction to Archives XX: The Shadow in a Marginalia II–Shuzo Takiguchi’s Books – One Object ‘with Latent Sounds’ 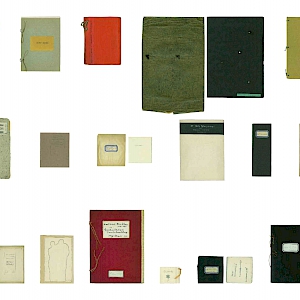 Should this place be called a “study” or a “room where shadows reside”?  …The simple act of placing a fold in a piece of paper. Mere pieces of letter stationery which might better be called koushin-shi (communication-poem or correspondences ). …These are both objects and words. A book which will forever remain unbound. Nor can the pages be put in order. — Shuzo Takiguchi, “Hakushi no Shuhen (margin of blank)”

One Object ‘with Latent Sounds’ Containing within it a tangible rendering of a single act. — Shuzo Takiguchi, “The Ship for Ararat or The Days of Small Insights into Honey of the Sky”

The study of Shuzo Takiguchi (1903-1979) is both a place where he produced his works, and a “room where shadows reside”; that is to say, a field for the various thoughts and memories which roamed throughout this space during the production process. *1 After his death, vast volumes of materials “Containing both time and dust. Pebbles, empty sardine tins…Decaying leaves” were left behind. This is a mountain of marginalia which some would consign to the dustbin as rubbish, and others reject as mere relics of fetish. Takiguchi, however, used these materials to create weird and wonderful books, his so-called “handmade brochures.”

These brochures which, being meticulously assembled by Takiguchi with his own hands, were not subject to the various processes of publishing houses or printing presses. They are created from a patchwork of fragments, including magazine clippings, tinfoil, labels, stickers, and handwritten notes, and can alternately appear complete or as works in progress. For Takiguchi, if the study is a “room where shadows reside,” then it is in these “handmade brochures” created there that these “shadows” can be found nestling.

What was Takiguchi trying to accomplish with these “handmade brochures” that are perhaps too fragile to even be called books being so weakly bound; with even this on occasion neglected. At this exhibition, we will interrogate the role and nature of the materials within an archive, while exploring the thinking behind Takiguchi’s production process, which sought poetry in a series of acts directed towards “the discovery of perpetual motion” and “hypothetical motion,” through brochures as “tangible renderings of a single act” (“The Ship for Ararat or The Days of Small Insights into Honey of the Sky”)

*1 At “Art and Archive Exhibition 16: The Shadow in a Marginalia — Shuzo Takiguchi’s Room” (2018) our interrogations were based on an imposition into the room which served as the venue for Takiguchi’s production, editing, and studies. Specifically, we focused on the volumes “written in the margins,” while exploring through photographs from an experiment by Takiguchi tracing changes in the positioning of various material clusters. We then compared the before and after in displays as the books took shape from the initial printed materials. This exhibition is a sequel to the previous event.